Few games have the capacity to fill the player with a genuine sense of awe & wonder, but Obduction is one of those games.

Full disclosure: I’ve been a fan of Cyan Worlds (Myst, Riven) for over 20 years. So when they announced the Kickstarter campaign for their new game back in October of 2013 -complete with eerie, otherworldly concept art- my heart leapt in my chest. When the game funded successfully, I rejoiced, and got a pen and paper ready. And having completed the game four years later, and I can say confidently that it was worth the wait.

*Note: To the chagrin of my spellchecker, Obduction is not misspelled.

Ob`duc´tion, n.1. The act of drawing or laying over, as a covering.

The name is both a play on “abduction”, and a hint at the core of the game. And that core is filled with pure, brilliant sci-fi nerdery. 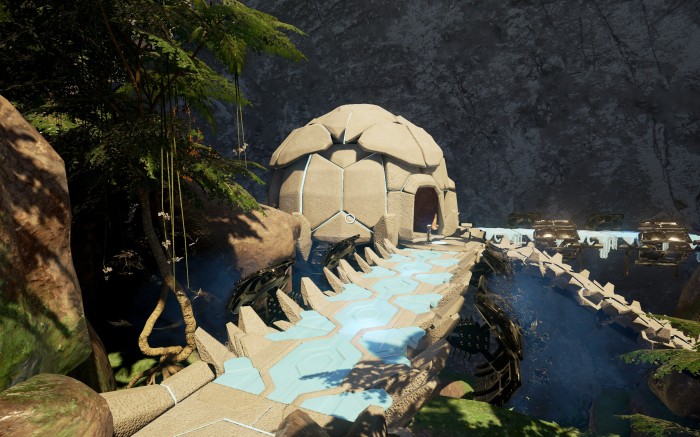 During the roughly 15 hours I spent with the game -pointing, clicking, moving levers & pushing buttons- I fell in love with Cyan’s signature world building, puzzle design, and minimalist “you’ve got to earn it” storytelling all over again. And Obduction does a great job of giving the player a lot to discover right from the beginning, keeping you progressing and not feeling stuck.

Outside of one section in the latter half of the game that has you switching back and forth a lot between environments to solve a series of puzzles, the general flow of exploration is good throughout. This section of the game was brilliant from a puzzle-design standpoint, but it also had me screaming for an SSD & shorter PS4 load times.

Of course, as with all puzzle games of this kind, you will probably get stuck at some point. And that’s okay. Playing the game with another person helps a lot with this, but playing solo like I did, it’s bound to happen. And I must confess, on one or two occasions I found myself peeking at an online guide through one squinted eye —wanting to be pointed in the right direction, but not wanting to spoil too much.

It’s here I have to give the developers some credit on succeeding where many have failed in this genre. By design, Obduction minimizes those “I feel dumb” moments. Solving one puzzle typically sets you off on a string of discoveries, rather than leaving you stumped in the very next room. In fact, it’s Cyan’s expertly-fostered sense of discovery that is key to the experience of this game. 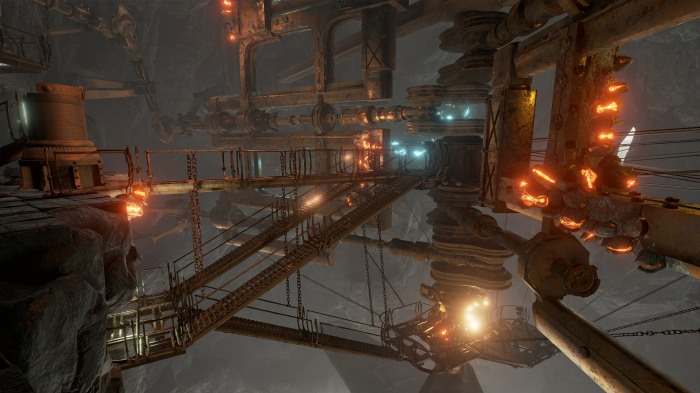 Cyan Worlds capitalizes on their unique visual flair to amplify moments of epiphany and exploration. Very few indie studios manage to pull off the level of graphical and design panache on display here, and it is impressive. Unfortunately, the framerate tends to suffer on the PS4 version in more graphically complex areas. It doesn’t hamper the gameplay, but it’s certainly worth noting. I also experienced the odd glitch here and there. The game crashed probably a dozen times in total during my time with it. Hopefully these issues will be addressed via future updates, removing those frustrations from players down the line.

That said, there were several moments in Obduction when a newfound, jaw-dropping vista and the unsettling ambient score coalesced, placing an exclamation point after the thrill of grasping a new concept. Gorgeous environments, machines, buildings and gadgets abound here, and their revelations often provoke a sense of wonder commonly known as “the tingling buns of adventure”.

Robyn Miller, Cyan World’s co-founder & resident composer, returns with 78 minutes of original score that color the worlds of Obduction. Piano, synth & strings fade subtly in and out of notice in long, flowing lines. Simple, organic piano themes decorate character’s living spaces, personal and melancholic, occasionally allowing in fragments of orchestral percussion. The Space Between Worlds I & II are personal favorites, containing an ethereal harp theme spinning in a 5/4 time signature, infusing mystery and anti-gravity into one of the game’s most beautiful areas.

Robyn Miller also portrays C.W., a character who -in true Myst fashion- is presented via full motion video segments. You’ll find a handful of charming and/or odd characters in Obduction, and they are generally well-acted. But as with most of Cyan Worlds’ games, they are not a primary focus. They exist, preoccupied and aloof, to provide a bit of context for the tasks you’re undertaking.

C.W., Josef and Caroline Farley are not laid-bare enough to inspire much empathy or a sense of knowing their motivations, which I’d love to see explored more in the studio’s future games. That said, the approach they’ve taken certainly keeps the characters shrouded in mystery, which both serves the plot and Cyan’s ability to propel you further into their world precisely because you know so little about it.

Obduction is a game I’ve been waiting to play since the late 90’s, and it met my extremely high expectations in nearly every way. While the game’s sometimes disappointing performance on PS4 can be distracting at times, it can’t squelch the sense of wonder inspired by the game’s gorgeous environments, ambient music, intriguing story and ingenious puzzles.